Woah, it has been a while since the last post, since then I continued with a few
more SNES games until the Steam summer sale gave me about 10 other
games to play… more about those another time.

After that the summer hit and as always that means a thousand projects
for some reason, I have taken care of two bigger ones but I will only write
about one today, expect the next one soon, I also have a Xeno update but that
will also get its own post.

I haven’t mentioned it yet but a while ago there was a fire in the basement
where I store all my broken consoles etc. and since they had to decontaminate
the entire basement I haven’t had access to those for a while.
In the end the fire only spread to a few electric cables and none of the actual
items were damaged, only a thin layer of soot on the boxes etc.
Either way it was quite scary to see your house getting surrounded by
firetrucks not knowing where the fire is, especially scary when a
smoke diver knocks on your door…
luckily I live on the 6th floor and none of the smoke actually
got in to the apartment.

Anyway, now that I finally have access to the items again me and my mother
filled up her car two times over and drove away with old items I don’t need
and thanks to that I could sort trough it all once and for all and get an
overview of what actually is hiding down there. For the last week I have
spent more or less the entire days cleaning, sorting and testing,
I managed to take a few picture, easy to forget when you are in the
middle of things:

First up some xboxes, that was my only real goal, to fix at least one xbox.

Once you know the construction it was easy to take apart and really easy
to put together, I thought it would be harder than PS2 but that remains the
worst console. Also it turned out that two of three consoles were modded,
really easy console to mod apparently, if I had known that back then… 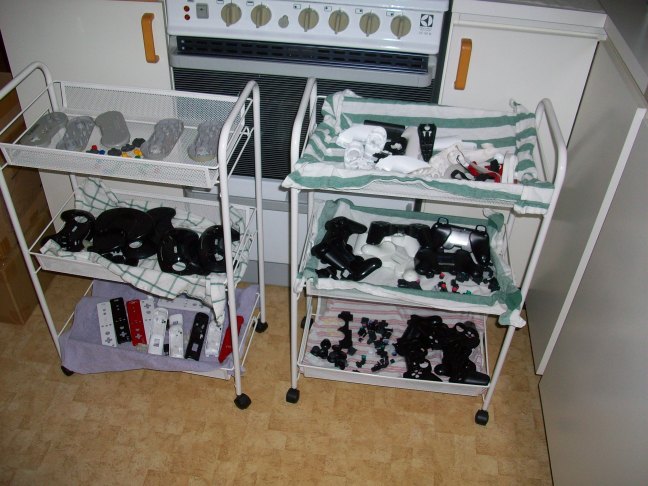 A LOT of controllers drying after a good old clean up.

Assembly time! By far the worst part, thanks to xbox controllers, just like
with PS2 controllers there are SEVERAL different version of the controllers
and the parts don’t fit each other which makes it into a terrible puzzle
just to find the right shells.

Testing time! You might think testing is the best part but it really
is a hassle, having to bring out all different consoles to test controllers
and cables! Also, before testing you can at least pretend that everything
works, hehe. Oh well, this was one of my biggest cleaning sections ever
and luckily it paid of, about 80% of the cleaned items actually works:

In total 24 working controllers and two modded xboxes! I am especially
glad about the PS3 controllers, some are in better condition than my own! 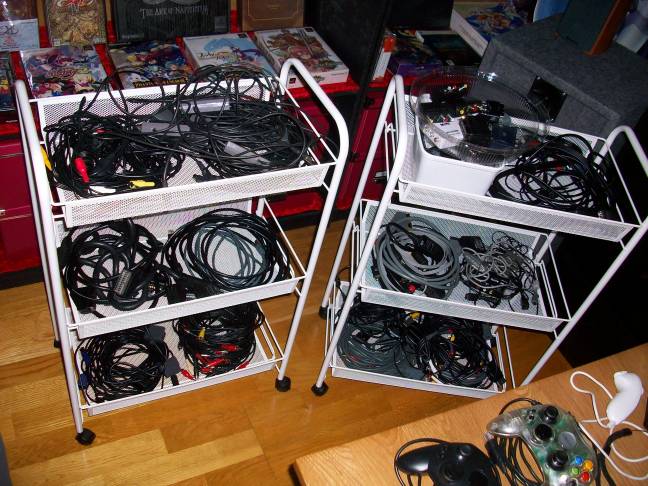 Hard to tell but there is 100+ cables of all kinds in there,
the highlight must be four gamecube extension cables.

This has been a pain but the amount of working things was worth it,
besides all this I now also have a lot of cleaned spare parts for
future repairs, a full box of mixed AC adaptors and some mixed items
not worth taking photos of.

I need a vacation from this vacation activity… I was lucky to have the
ESA stream, European Speedster Assembly as my friend through this,
just like SGDQ it is a speedrun marathon that goes on 24/7 for a week
during the summer, a lot of good runs and since it is held in Sweden
my brother is there watching it all live, a long week for both of us.