It has been a while since the last post, there hasn’t been much to report
regarding the collection lately since most of my money is spent
on a new computer… a boring but necessary investment.
Hopefully I will have something interesting to show in the
coming weeks atleast and of course the upcoming
Star Ocean 5 Collectors Edition is pre-ordered!

Another reason for the lack of posts is the trip I made two weeks ago,
I made the trip to meet up with some old “internet friends”, quite strange
to finally meet them after almost 9 years!
I don’t really like long trips or meeting a lot of “new” people at once
but I am still glad that I made the trip and it turned out to be a
successful one in the end! A few interesting conversations, some odd
games we tried out and I finally beat Dragon Quest IX thanks to
all that traveling time! Wo!

As the title says I finally grew tired of my old LEGO city and
DEMOLISHED it, usually I grow tired of my own creations quite fast but
this one has been with me for quite some years.

After sorting out all the pieces the shelf was ready to house the items
that I originally had in mind when I built it: 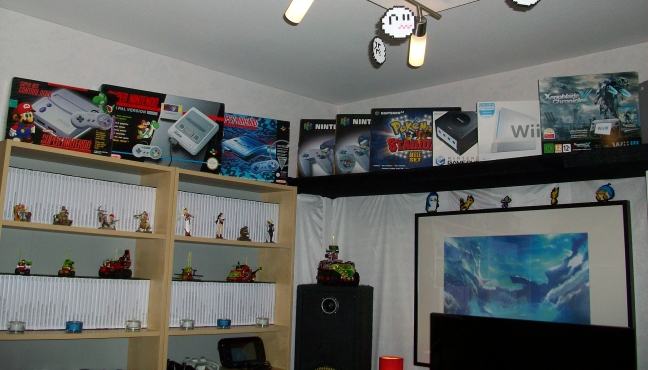 The console boxes! I don’t really collect them but they have become
quite a few over the years and I don’t want to fill up the game room.

I’m not 100% satisfied with the setup but for now it is something
like a Nintendo VS Sony corner.

2 thoughts on “A demolished town”